“If you can make it over the mountain (to Roncevalles) you can do the Camino” – Remy, 50 (ish)

This morning, at 6am, I left my sweltering apartment in Barcelona to make the 10 hour journey to a chilly St Jean Pied de Port in the French Pyrenees. As the crow flies (oh to be a crow) the distance seems far shorter than the hu-ge schlep via metro, train and bus via the Ebro Valley, Zaragoza, Pamplona and San Sebastián by rail, then Biarittz, Bayonne and finally Saint Jean one winding bus ride later. But, finally, je suis arrive. 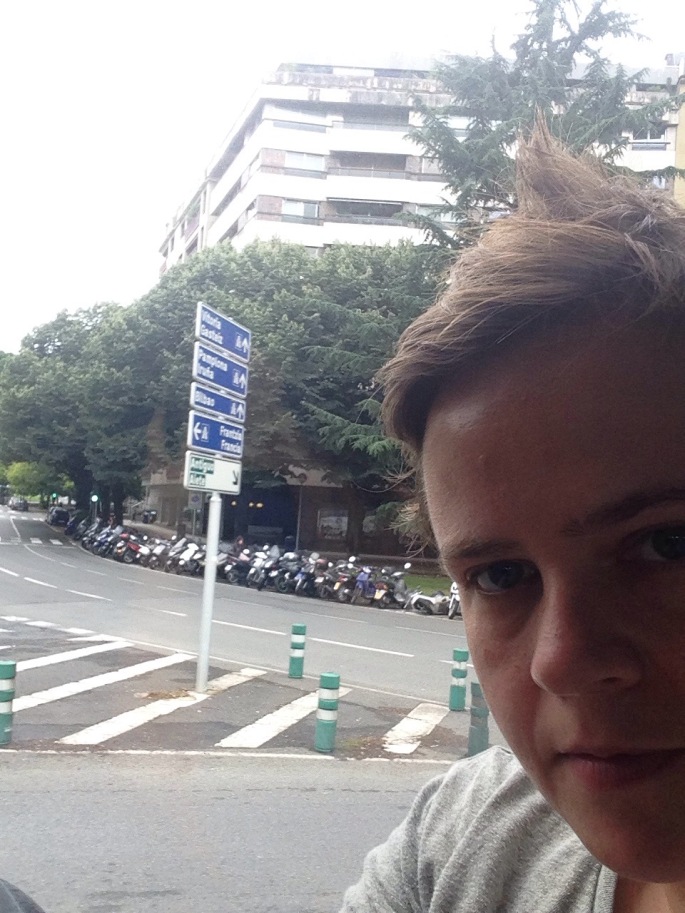 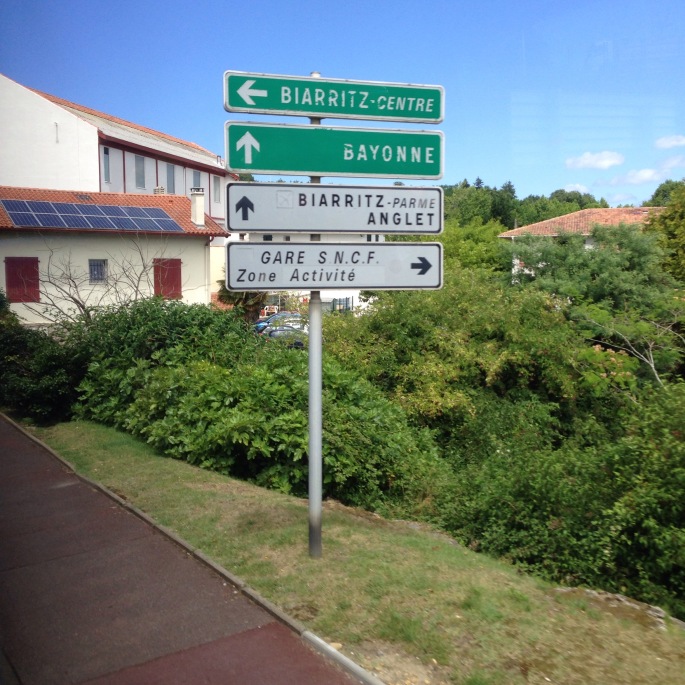 (above) The picturesque town of St Jean Pied de Port lies nestled between the slopes and misty-topped peaks of the French Pyrenees. Behind one of those peaks (doubtless the great big bastard one) lies Roncevalles, the legend of Roland and the other 33 stages of El Camino. But, let’s not get ahead of ourselves! What happened in St Jean?

<<<Oh, yes, btw, that’s what I’m doing here. The Camino de Santiago. It’s a pilgrimage from, well, anywhere you want really as long as you end up in Santiago and swing by Sarria you have completed ‘El Camino’ – many start in St Jean, some further back in France, the Spanish prefer Roncevalles itself as the starting point. I could have taken the Camino Catalan and began in Barcelona but, I dunno, there’s something romantic and authentic about starting in St Jean; and it has nothing (everything) to do with Paolo Coelho>>

Well, firstly, and most importantly for any pilgrim, I picked up my Pilgrim passport – setting me back a cool €2. Complete with stamp and date. Without this passport you are forbidden to stay at the Alberges and you can’t collect your certificate in Santiago. And you don’t want to have to walk all the way back again! Do you? So don’t forget it!

Secondly, I have my St James scallop shell. Another €2. You’ll be unable to look other pilgrims in the eye without that essential bit of kit fastened to your pack.

Thirdly, I have a printed list of all the Alberges from here to Finisterre provided by the passport office (optimistic, but OK, all pilgrims get this not just the young, fit ones like me).

This is the passport office – 39 Rue du something 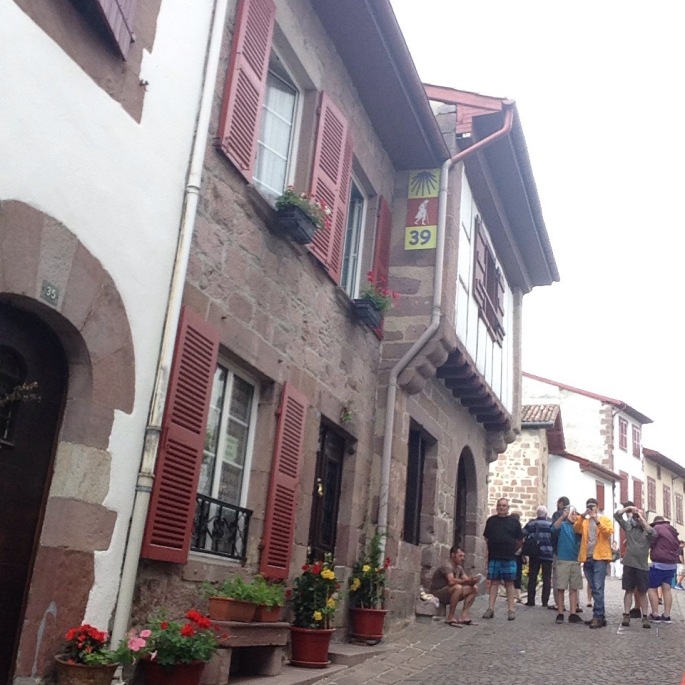 With all the essentials taken care of what could possibly go wrong?

Plenty. According to Remy.

Remy was/is (I find it hard to let people go), the French waiter at the fabulous Michelin star restaurant at the Pyrenees Hotel in St Jean. He has that uncanny ability that all French waiters possess of making you feel terribly important and yet utterly foolish.

‘Done much hill walking have we madam’?

No, but I was in the Vall du Nuria last weekend and…

And before you can even process the last comment…

‘of course not, you’re English‘

naturellement, he is right. My weekend in the Vall du Nuria is not comparible to the 900Km El Camino and, let’s be honest, even if I had desperately wanted more bread the English gene would never allow me to inconvience anyone even if they point blank ask me if I’d like some bread and especially when it’s their role to serve. I am, after all, English.

Regardless of nationality, had I wanted more bread, it would have already materialised for me. The camino, it is said, will provide everything you need along the way, as if by miracle. This much I believe to be true.

So no matter how daunting Roncevalles looks from here, like the rest of life, it can be reached in the same manner everything can be reached and has ever been able to be reached; in this moment and one step at a time. Time to start believing.

Injuries Inflicted: 3 – all with walking poles. One to self (left leg 3 inch graze. One to old lady (jab in rib). One to small dog (possibly Pomeranian) – light tap to head, just above right eye.

Grateful for: Lux Soap – already washed my face, hair and pants with it and all acceptably odour free.

Next Day Intimidation Factor: 9/10 – No question, tomorrow is gonna hurt like a …

On the morrow then…

Oh, and if you can, do go to the Pyrenees Hotel for your last meal before leaving St Jean Pied de Port. If you don’t you’ll be missing out on this… 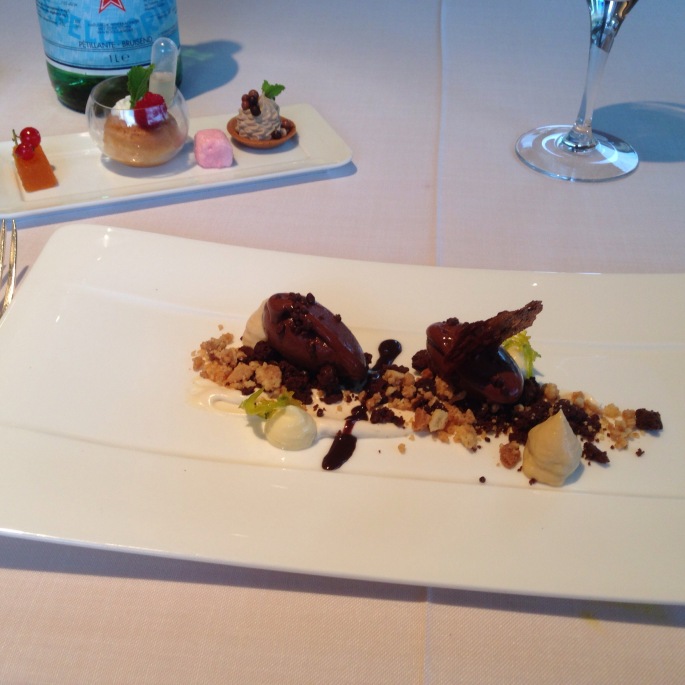