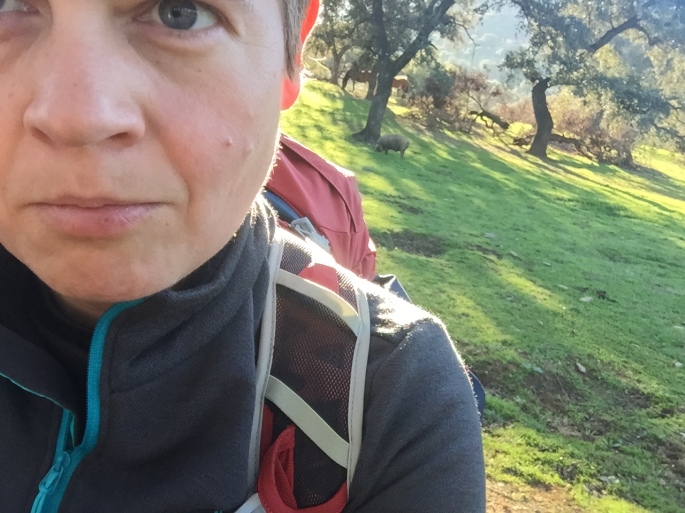 I woke this morning to my 8am alarm having slept an extravagant 10 hours, can’t think what could have made me so tired! Throwing back the curtains in my comfy room at the Castil Blanco hotel, it was already shaping up to be a hot January’s day on the Via de la Plata. I got my hot weather/cold weather/walking and cycling gear together, stuffed it tightly into my backpack and pootled downstairs for breakfast. 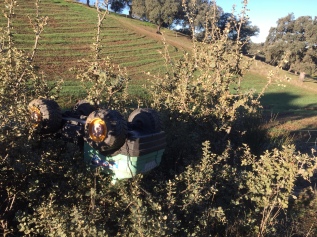 My hacking cough was matched only by the innkeepers who was full of questions (and answers) this morning. ‘Where is your bike?’ he enquired with a worried look – perhaps thinking it has been nicked from the safe area of the hotel. He looked suitably relieved when I told him in my broken Spanish that it had been returned to Seville. I’ve been trying to learn Spanish for years and knew my obsessional re-watching of all the movies of Pedro Almodovar had to come in useful for something and today it did – as a verb (Volver). The innkeeper disappeared to make tostada and came back with the bread, a jar of honey and a sachet of soluble ibuprofen – at least I’m doing a fair job of looking sick – such a good job in fact that his daughter offered to drop me off at the entrance to the Sierra Norte and skip the highway section of today’s walk (which is why I got so far today). Ignoring everyone’s advice around lifts from strangers I gladly got in and grilled the driver about her thoughts on London. She’s never been and never wants to go – looks ‘cold and unfriendly’. She got that right. And I was to learn today that this part of Spain is not only warm and friendly, it’s also about as beautiful place as I’ve ever walked on God’s great earth. 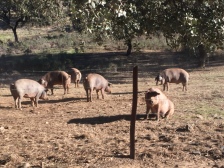 Today, I walked among countless herds of Iberico pigs who display a very strange behaviour, being absolutely non plussed about your presence until you’re almost toe to trotter and then squeeling and darting off the second you stop to whip out the camera. I suppose I didn’t get their best side. Then there were the goats, sheep and their new lambs – they were less scaredy than the pigs but still disinterested at best. The cows looked disappointed. The dogs though, I’d been warned on the forum about stray dogs, told to lift a trusty walking pole and motion at them with intent. Unfortunately I left my walking poles behind because, I was meant to bike this road, remember? So I did the next best thing. I cooed at all of them, petted each one and ruffled in my bag for inappropriate treats. Nice doggies!

Not having your poles is also a bit of a bark when you’re hauling yourself and your rucksack full of cold weather/cycling wear up steep gradients – I am missing trekking poles so instead I’ve taken to solider-like arm swinging to help propel me up and over. I was also missing clean clothes, I’d washed nothing since Seville so when I came across a poster for an albergue in the next town (El Real de la Jara), I was made up to find out I’d get full washing facilities – now super keen, I powered in the last 4kms to make sure I could get the laundry done. 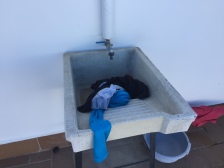 Arriving at the Alojamiento albergue on Pablo Picasso (not his best work) I was greeted by the hospitalero but sadly there was no washing on today as his mum was out! Booo! The good news was that the day was scorchio, not a cloud in the sky, and so, looking at my watch, I clocked it was 1.30, the sun sets at 6.30, it was time to forget the rumbling belly and instead get hand washing my clothes – this could be the only time in my life I’ve chosen cleanliness over hunger. Needs must! I was beginning to rival the Ibericos (for smell, not fatness!!!).

Washing done I checked out the town and found that I had arrived at El Real’s most popular restaurant just minutes before the rest of the locals and got the only remaining table in the sun. I ordered liberally – a cheese plate, chorizo and a mixed salad. Hungry as I was, I couldn’t eat the lot (plus 2 beers for 20€) so hurried back to the albergue to check on the laundry situation and Skype the family/girlfriend. Thankfully, all my clothes are dry but unfortunately they still smell – Fairy liquid does not double as a good detergent! *taps nose* 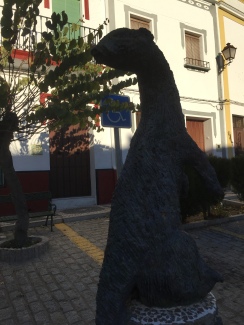 I like El Real de la Jara. Its church bell tolls every hour three minutes early, it has a shop called ‘Every Day’ that’s closed on Sunday’s and it’s got several large statues of strange animals that rarely make it as town statues – dogs, weasels and a unicorn! (ok, it might have been a stag).

So here we are – 6pm, alone in the albergue with nothing to do for the rest of the evening. The WiFi is free so I guess I’ll watch the Golden Girls and huddle in my sleeping bag ready for an early start to Monesterio tomorrow. This has been my favourite day on any Camino – the scenery was varied with such wildlife, trees, plants, flowers as well as small lakes and parkland – I didn’t know this part of Spain was so stunning, I’d always associated Andalusia with barren drylands yet its beauty is unrivalled by anything I’ve seen on the camino Frances and it’s a mystery to me why there are not 250,000 people per year walking this trail. I’m secretly glad they’re not though.