#Man, they said we better, accentuate the positive
Eliminate the negative
Latch on to the affirmative
Don’t mess with Mister In-Between…#

I’m on camino again! This is camino trip #7 and this time I’m on the Camino Primitivo, so called as it’s the oldest camino which the royal Kings of Spain, based in the then capital, Oviedo took when they found the bones of the apostle and set up this pilgrimage all those years ago (and that’s a story for another day!)

It’s been quite a trip already! The flight to Oviedo was perfect, on time, nothing delayed me into Gatwick I was beginning to get suspicious! It was only arriving into Oviedo itself that my bad luck/great luck cycle began which tends to plague/bless my caminos!

The dramas began when I was sternly told off at the airport by security for walking on the baggage carousel! Then, I got onboard the wrong bus to Avila and realised with seconds to spare and dashed off and onto the right bus which was also seconds from departing. In better news, the helpful receptionist at the Gran Hotel Espana where I stayed last night informed me I could get my credential one hour earlier from the tourist office allowing me to set off at 9am and not 10am. For the first camino ever, the credential was free. Moments later Karine text me to say my wine fridge broke at home (or she broke it!) – £400 down the swanny – this was all before I even started walking today! 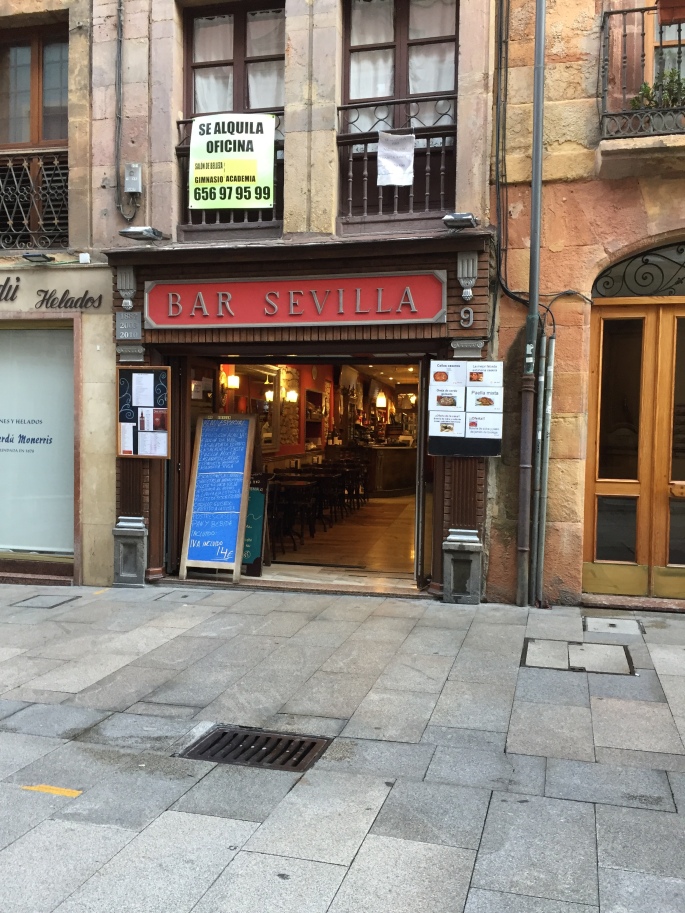 The Camino officially begins at the Cathedral and this stage was only supposed to be 23kms but today I’ve clocked up 29kms on my Fitbit what with going off track for coffee pit stops, taking a detour to the tourist office and multiple wrong turns. 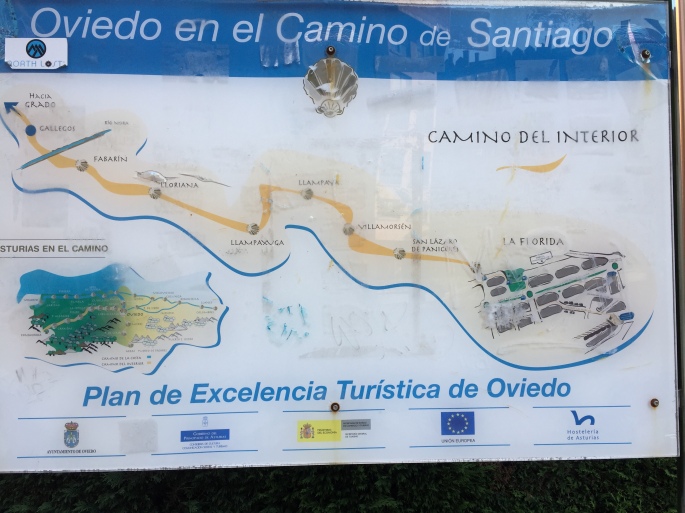 The Camino Primitivo is meant to be one of the hardest (yeh-huh) and loneliest (nuh-huh) caminos. I ran into my first walking partner at just after 10.30, and only 5kms into the walk, a public défense barrister from New York, Carrie. As lovely as she was she had already been walking the Camino del Norte for 10 days and was much fitter than me. By the time we got to the serious inclines outside Escamplero I was seriously flagging and told her I’d have to catch her up! When I found her again at the town centre we had lunch and her friend from London, Claire joined us. She was very late in the day due to having to get new gear due to chiches (bedbugs!) in a previous Albergue. To try to kill (burn them alive!) them she put her trainers in the drying machine and ended up shrinking her shoes – she had to spend a few hours in Oviedo this morning buying new shoes! Her trail name is ‘Shambles’. 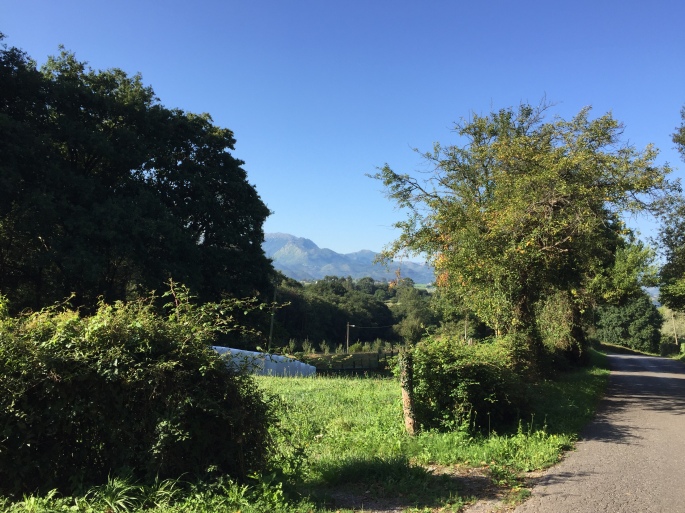 After lunch I met Lorenzo in the chapel below. He was telephoning a taxi rank on the behalf of an older pilgrim couple. Looks like one of them had taken a leg injury on day one and it’s the end of their Camino. We heard on the camino grapevine they are already back in Oviedo and planning what to do next. 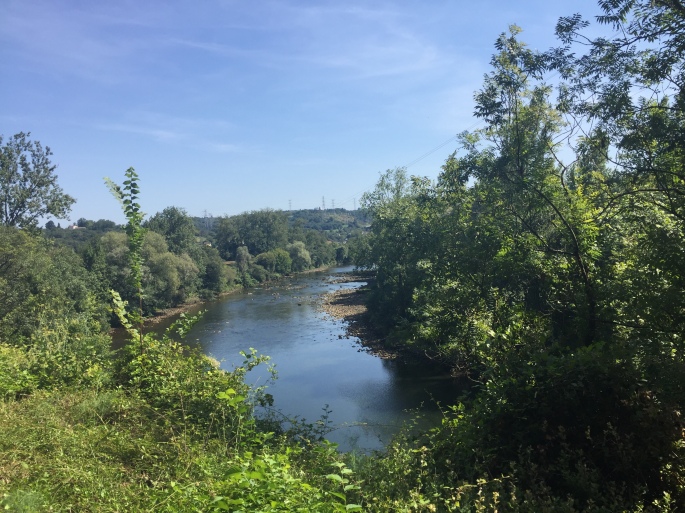 I walked with Lorenzo for a while until we hit steep hills and I let him go ahead. Asturias is crazy hilly. My Fitbit registered 175 floors climbed today and in the 34c heat there were times when I felt dizzy. I had to break out the Graze nut boxes I brought with me from home for the hospitale mountain pass on day 5! Already on day 1 I was flagging and by km 25 I was stopping every kilometre! This was less hiking the Camino and more dragging my body from shaded spot to shaded spot!

I met Paco, a pilgrim in his 60s about 3kms from Grado at one of my many exhaustion stops in the shade. I only just arrived into the Albergue before him an hour later. Both myself, Paco and Lorenzo are in the hotel auto-bar in Grado and we’re all zombies! As much as I wanted to walk alone today this cast of characters helped the kms pass! 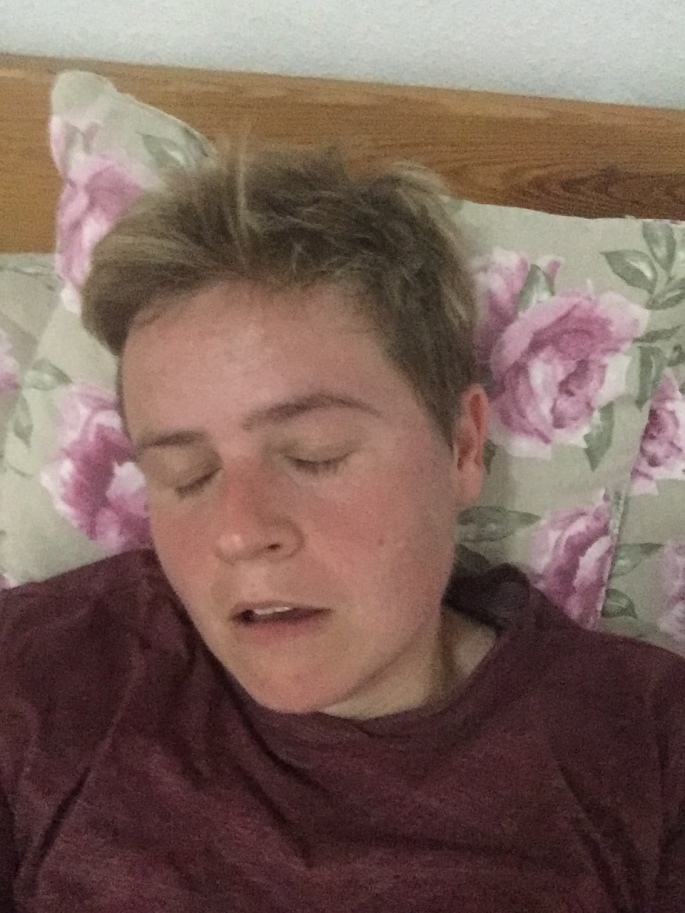 The hôtel auto bar served a huge pilgrim menu of half a litre of red wine, a litre of seafood soup and chicken and chips for dinner. I passed on the ice cream cornetto for dessert and felt myself incredibly restrained. I’m stocked up on sugar and nuts for tomorrow incase I find it as hard tomorrow!

Tomorrow the guidebook says it’s an early slog 500m straight uphill in the first few kms and then straight back down again – a joy for the old knees. After that it’s a 23km walk into Salas. I had planned to go to Bodenya at 30kms where there is a kind of hippy Albergue with communal meals but tbh I’m too tired to put in a 30km day tomorrow PLUS I need to do washing chores tomorrow and so need the daylight! I will explore the delights of Salas instead.

It’s a beautiful road but boy did I struggle with the hills and the heat! Tomorrow the temperature drops 8 degrees. It’s still 31c here now at 9pm. The good news; I am going to sleep like a baby tonight.